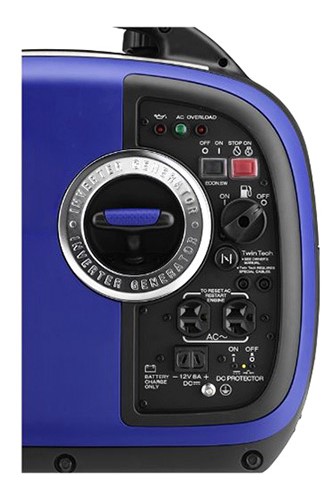 The Yamaha EF2000iSv2 is an advanced, ultra-light, extra-efficient, gas inverter generator that takes the best electric profit out of the last drop of gasoline. It can produce up to 2000 watts for an average runtime of 10 hours at idle speed on a full tank of gas.

It produces 1600 running watts at 13-16 ampere and 120 volts. The spark arrestor was approved by the USFS, and the noise muffler minimizes the noise down to a 50-decibel level at 25% load.

It is fitted with a useful throttle technology that makes the engine run according to the load. This makes the unit burn fuel more efficiently and produce less noise. The other advanced feature incorporated to this model is the Pulse Width Modulator. It also comes with a full 2-year warranty.

Extremely consumption efficient, the Yamaha EF2000iSv2 produces an amazing 2000W surge power and 1600W running power, that means between 13,3 to 16,7 amperes at 120 volts. It has a 79cc OHV fan-cooled motor that maintains a low temperature while running. I personally think that Yamaha machines are much more dependable, and even if purchasing one of these costs twice the money of a machine made in the US, we can consider it a long-term investment for the durability of the engine and the money-saving fuel efficiency. As a safety addition, it comes with an electric overload breaker that prevents load disasters.

It is manufactured in Japan. That’s another way to say that it is extremely easy to use. As usual with most electronic products developed in Japan, controlling the Yamaha EF2000iSv2 is a piece of cake. The starting cord is light to pull and understand. It requires one or two initiation strokes and then it will softly start humming. You might be thinking it is no big deal for a 76cc engine, but try to start any other inverter this big. You will be pulling the heck out of the engine to force it to start. All you need to do with this machine is pulling the cord once, briefly and warmly.

Powerful enough for running several appliances, it happened to be able to run my 15,000 BTU air conditioner and with its remaining capacity, it could still recharge two batteries for my generator. It only provides 2000W surge power. The overload monitor did never turn on and the motor never stopped. Well, I must say that I only have this unit with me for two months so it is natural that everything goes right so far. Anyway, regarding its fast waking up when started, how quiet it is, and its capacity for running for 24 hours at full power, I wouldn’t lie if I say this is the most reliable inverter generator I have ever found.

Much quieter than you would imagine a 2000 start wattage inverter to be. At 25% load, it produces around 50 decibels. That’s like listening to the low roar of a car speeding up at a distance of 10 feet. It is like a job-addict that never gripes when things get hard. At full load, it’s like doubly quitter than the latest Briggs and Stratton machine I tried, that I found to be ultra-quiet!

Weighing 44 pounds, it features an extra-compact design and a carrying handle. Nothing refrains you from taking it on your fishing activities, travelling or camping. In a word, portable. And very easy to start as well.

Very lightweight and small, 2-year warranty, 2000W surge power, very consumption efficient, fairly quiet and nice to the environment. Not loud and yet powerful for a square-foot machine.

Costs nearly twice the money you would pay for a similar American device. Fuel stabilizers are recommended for more durability.

The Yamaha EF2000iSv2 is a 76cc engine in an excessively reliable one-square-foot unit that offers the best of Japanese engineering and provides 2000W surge power in the safest and most constant way, without any load distortion. It is suitable for any application, like as a power backup for home, or for powering your tools, your RV, or fishing equipment, and even for camping in the wild nature! It won’t roar the little creatures away from you.