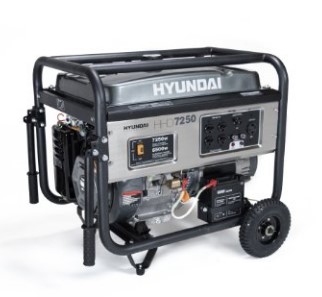 Hyundai is one prominent company known to produce the best kinds of motors such as the Hyundai hhd7250, which are widely distributed in various parts of the world. As one of the fastest growing company across the various existing countries, Hyundai does not only produce different kinds of cars and satisfy men and women alike. Hyundai motor company also produces high quality engines and motors that permit adequate and excellent performance of generators and other engine-powered equipment, devices and apparatuses. Today, one of the best selling products that Hyundai has produced is the Hyundai HHD7250.

Hyundai HHD7250 is a portable generator that basically provides power and electricity to residences, industries, agricultural set-up and the increasing demands of the people living in the urban areas. Besides that, this one electric generator is one of the most highly opted types during power shortages and in extensive renovations that require more power than the usual amount of electric current being needed. In addition, this generator presents unique features that cannot be found in other generators bearing other brands.

For one, Hyundai HHD7250 has the ability of providing adequate amount of power to different devices all at once. Not just that, this generator also has the unique ability of placing individual appliances in operation, which needs a greater amount of electrical power to operate at an optimum level. Another wonderful feature that this kind of generator possesses is that it has four 120-volts AC outlets. With this, different appliances and devices can go on operation at the same time. This generator also has a 120/240 volt outlet designed in a twist lock manner, primarily for large appliances and equipment. The best thing about this model of generator is that it is designed with an easy to use control panel that allows users to select which kind and amount of power is needed. The power supply can be adjusted to an ample power system or to a clean power system, depending on the load of electricity needed. In addition to that, this generator can run for as long as 8 hours with one click electric start button. And, the best thing about having the Hyundai HHD7250 generator is that it comes with a comprehensive manual that tackles on different important topics regarding the components, functions and troubleshooting techniques necessary in operating such machine. 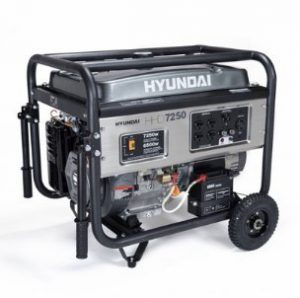 However, this kind cannot exist perfectly in form and function. Its lightweight makes it handy but can also be easily damaged as it is transferred from one place to another. Apart from that, this machine elicits a noise when turned on, which can be disturbing and irritating, especially when it is used for a long period of time. Also, this machine is prone to some problems that cannot be detected easily by amateur users, more particularly when the generator is frequently used. The possibility therefore, of wearing off the optimum functional capacity of its parts is much higher. Thus, there is a need for troubleshooting techniques to be learned and understood.

From the many users of Hyundai HHD7250 who gave positive reviews, one among them has claimed that such motor brand performs par excellence than other automakers. Besides the fact that it is designed with an easy set up, he claims that the generator functions more than what he expects. Its smooth operating system creates a less stressful electrical power generation that goes compatibly along with its simple yet comprehensive manual, sufficient enough to guide amateurs and first time users. More so, its engine creates a lesser intensity of sound that basically reduces the level of noise as compared to the other brands of portable generators.

Today, many countries situated in various parts of the world are experiencing power shortages and frequent electrical disruptions due to the decreasing level of power supply sources. Thus, many people have been vying to possess high quality performing generators that can suffice the need of having electricity to carry out daily operations. And with the emergence of Hyundai HHD7250, electrical power disruptions and shortages have never been a problem ever since, truly having this kind of generator have made the lives of people, living in the modern society, easier, more comfortable, and reasonably affordable and equally satisfying.