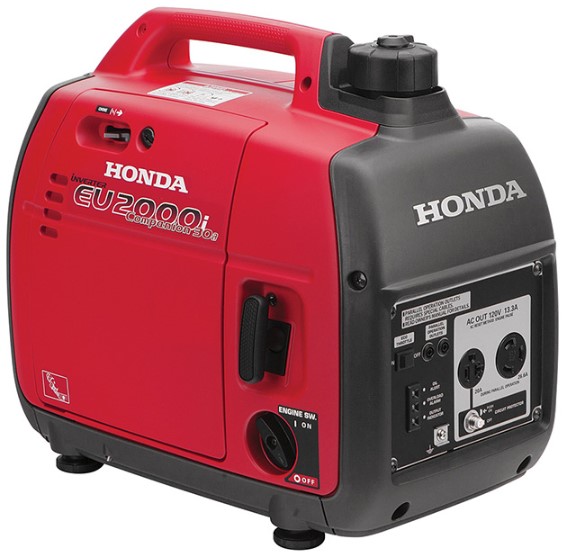 Honda’s determination to launch creative and advanced items to improve our lives produces much more than vehicles. After 50 years of history, this brand has given the world hundreds of million power appliances. Honda is still the top brand of generators (and several other power tools) with a 4-stroke engine. The power range of this series come from 1000W to 10,000W and they are all consumption effective, low-pollutant, and eco-thoughtful machines, made for home, outdoor, and commercial applications. This is a review on the Honda EU2000i Inverter Generator which is one of the most popular portable models available. It is plenty of cutting-edge features that place it as one of the best generators you can get.

The Eco-Throttle system adjust the load of the motor automatically, maintaining a proper performance depending on the power required. It features a higher fuel-efficiency and a lower noise level.

Honda generators are manufactured at eleven branches in different locations around the world. Boosted by their original ideals and according to their values, the brand keeps launching creative devices fitted with the newest features to satisfy the needs of every type of user. Proud to have an enormous service network around the world giving users the best support and attention, complying with the highest quality standards and providing reassurance to their customers. The brand is determined to provide quality and satisfaction around the world.

This representative generator by Honda can run many different appliances, which is why it is widely used for powering household devices, camping equipment, and much more. Providing 2000 surge watts and 1600 running watts, it will run your microwave, fridge, stove, and many other appliances. You also get the computerized pure sine wave inverter system that helps you recharge your delicate electronics safely. This way you can power your phone and run a LED TV.

It is not powerful enough to run heavy-duty tools in a workshop or an air-conditioner, but it is enabled to run in parallel so you can attach it to another identical unit to get twice its power. Light and small, it weighs 45 pounds and is perfectly portable which is great for campsites and RVs as well as a reliable energy backup for your home.

Although it is not what we call affordable, it is a dependable generator that will deliver a long lifespan of service. Comes with high-efficiency features that ensure slow gas burning and money saving in the long term. Above all, its 3-year full warranty demonstrate the brand’s absolute confidence in their product. They also provide a high-standard service network that will help you with any issue. It is a top-notch generator made to meet the needs for many types of users around the world.

The Honda EU2000i is an efficient and safe portable inverter generator for home, outdoors, and charging delicate electronic devices.

Honda EU Inverters come in a wide wattage range and cover several energy requirements and applications. They power your recreative devices, your home appliances, and also your work tools. This popular series can power many different appliances. They are fairly quiet, portable, and work great on campsites, backyards, RVs, holydays, and many other occasions. They also can be applied as a dependable, handy backup source in case of power outage. Can also be good for working places. They comes in the following sizes:

They are powerful inverter generators that deliver clean and steady energy for stoves, fridges, air conditioners, several home appliances, tailgating, and equipment for different activities. These effective machines run a wide range of appliances with the lowest noise levels in the market. Thanks to their recently applied inverter mechanism, they can even power the most delicate digital equipment like phones and computers. Offering the lowest total harmonic distortion, or THD, they can safely power any microprocessor device. They have a small and light design and burn fuel in the most efficient way. They are made to last longer and are manufactured by one of the most prestigious generator brands in the global market.

Since the firm set up in 1948, Honda never stopped moving on always looking towards the future. They distributed over a hundred million power tools worldwide and started making these little power plants in 1953.

Nowadays, Honda has eleven facilities spread all over the world. They make about 48,000 generators for any kind of power need. Such a wide series of generators have a wide range of applications, as an outdoor and RV energy supply, or as a reliable home power backup in case of outages.

Honda launched the E300 in 1965. It was the first portable generator by the brand, and it was a huge success. They produced more than 500,000 units. But they went further to launch an ultra-light inverter generator in 1998. It featured fuel-efficiency and low decibel levels that came from a unit with reduced vibration. They also fitted the machine with an idle speed and the ability of running in parallel. In 2015, Honda had more than 40 million happy power tool customers in the US.

The Honda EU2000i features an Eco-Throttle system that controls the speed of the engine automatically to run proportionally to the load needed. It doesn’t only make the unit consume fuel more efficiently, but also makes it quieter and allows it to have a smaller design. It also uses a sine wave system which is a technology that delivers a regular current of energy and therefore makes it safe for electronics that are sensitive to distortions in wattage and amperage. All this modern features made this model settle as a top-rated generator in the market.

Finally, in this review of the Honda EU2000i inverter generator, the conclusion we drew about this model is that it is an awesome device with no important drawbacks, powerful, and will provide many years of service. And don’t forget that it is a reliable power source for home appliances, camping, boating, RVs, and your garage door.