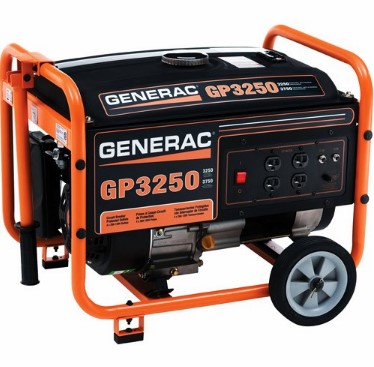 Search the Internet for emergency power generators and Generac, including the Generac 5982 GP3250, will almost always be at the top of the list, if not holding the top five search result positions. Savvy shoppers will do the research necessary to determine what company or product represents the best mix of quality, function, and value for the investment of their hard earned money. Power generators are especially scrutinized since they represent safety, security, or even luxury.

The Generac 5982 GP3250 is a portable generator that produces 3, 250 watts with a maximum of 3,750 watts. In home power outage or emergency situations, that is enough power to run a computer, a mini refrigerator, or a home security system. It can support the needs of a construction site powering circular saws or belt sanders. It can be taken camping where it will supply enough power to run an electric grill, a portable sound system, or outdoor lights. Weighing in at 116 shipping pounds, the Generac 5982 GP3250 isn’t easily knocked over, but can still be easily transported and placed where needed. Wheels and a folding handle add to the transportability and easy handling features. Fueled up with 3.5 gallons of gas the power can run for nearly 10 continuous hours. 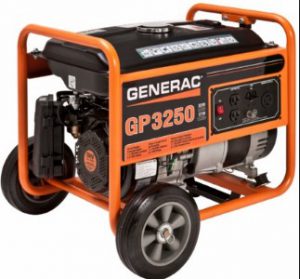 Various comparison sales sites as well as comparison venues show a wide variety of owner and user opinions of the Generac 5982 GP3250. Star ratings run from zero stars, a bad rating, to a full five stars, which means an excellent product with very good results and value. At various sites, Generac hits each level of star rating, but most of Generac’s ratings seem to be either five star or 1 star. Predominantly, the zero ratings come in from customers who experienced major issues with damage caused during shipping or while prepared to ship from the manufacturing site. For many of those customers, the damages caused either during manufacturing or shipping were so severe that the generator would not even function. The most common items were dented covers that prevented starting or operation and broken chokes that also did not allow the engine to run. Those same customers then experienced warranty issues, poor customer service, or refusal by the company to accept returned items or to pay for repairs. Some customers were also unhappy with the fact that the product was not manufactured in Wisconsin as believed, but rather in China.

As an example of a one star rating, one unhappy customer said,

“Just received my Generac 5982 GP3250 today from Amazon via UPS. I learned about shipping damage after reading some reviews on this product. The packaging was in good shape, which I inspected upon delivery. After opening the package,there is the unique strong odor of Chinese manufactured rubber. Everything looks fine until I remove it from the box. Then I see broken pieces of plastic at the bottom of the box liner. There lays the broken-off choke lever and some other broken plastic pieces. I inspected the carburetor and air filter housing and can see a large piece broken off the air filter housing and a piece of metal broken off the carburetor which holds on the choke lever. This was not broken by UPS shipping. It could only have been damaged prior to assembly to the frame unless someone kicked into the unit with a shoe toe prior to packaging. Some of the broken pieces were there and others weren’t even in the packaging.”

On the other hand, those customers that were satisfied with their purchase and the product made notes about easy starting, easy assembly following the instructions, and a common note that the Generac 5982 GP3250 was quieter in comparison to the noise levels heard from the generators that neighbors were running. Caution should be exercised when considering the star ratings of different websites. In particular, note who wrote the review. In many instances, five star ratings were written by companies who retail Generac power generators. In addition, article reviews by companies that retail those same generators posted the same kind of positive reviews and ratings. If you are searching for a possible solution to your energy needs, consider the Generac 5982 GP3250.