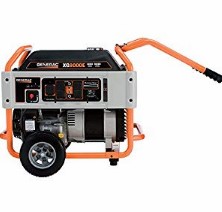 Losing power can be crippling or just annoying, which is why products such as the Generac 5747 XG8000E are available for home and residential use. The unit is a 10,000 watt, 410cc gas powered generator. The ability to use gas purchased from a traditional gas station allows for easy upkeep and the included wheel kit and electric starter aid in the simple operation of the model. The Generac 5747 XG8000E is an ideal unit for houses, small businesses and other facilities which may require emergency power generation during a power outage or blackout.

The Generac 5747 XG8000E also comes equipped with an illuminated control panel, which allows for easy operation. The generator is beefy enough to run for 10 straight hours, working of off gas housed inside the 10-gallon holding tank. Though the model can generate up to 10,000 watts for start up purposes, the unit typically cycles down to run at an average rate of 8,000 watts; which is enough to keep appliances running and lights on. In fact, when the unit is run at half power, thus prolonging operational time, you can generate enough power to keep even major appliances and systems functional; including heating, air conditioning, ovens and refrigerators; along with minor appliances and devices such as computers, security systems and lights. 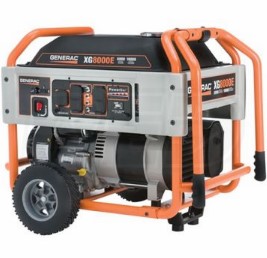 The rolling ability of the Generac 5747 XG8000E makes this portable generator truly a mobile unit, one which can be wheeled from location to location for operation. The electric starter involves a simple push button operation to get the unit up and running. Ease of operation is crucial in a home use generator, as typical operators are not skilled nor trained in manual starts or priming of equipment for operation. Generac generators, for residential use, have removed some of the complexities associated with operations to make having a personal use generator an easily understood process and procedure.

Customer reviews are imperative to comb through to get a good overview of consumer experience with higher priced items such as the Generac 5747 XG8000E. One customer review said,

“First, let me make a clear distinction between Amazon and Generac. Amazon could not have done better both before and after the sale. Exceptional service. Generac, on the other hand, leaves much to be desired. But I assume that the generator will deliver as promised because I’m certain other reviewers would have said something by now. My generator was DOA. It would not turn over with the electric start in spite of charging the battery for two days. Generac’s warranty policy states that portable generators must be returned to a factory authorized service center under all circumstances. In my opinion, having wheels doesn’t make it portable for warranty purposes. Somehow, getting a 255 pound generator in the back of my 4 door sedan, and driving it 25 miles to the closest service center after paying over $1,200 for something that never even started leaves much to be desired. So you need to deal with Generac and their warranty policy. But, it will cost me $100 right off the bat because Generac will not pay to have anyone come out. I don’t think I should have to do this on brand-new merchandise. So before you buy anything from Generac, just be aware of what you may need to go through if the item is defective within the warranty period. If you’re one of those people who regularly haul things around in a pick-up truck or with a trailer, fine.”

The Generac 5747 XG8000E is a good portable generator for those who seek to have a backup, emergency power source ready and waiting in the event of an emergency or disaster. being without power is not always the best situation, especially in areas prone to losing power in the dead of winter. Having a portable generator around can give you peace of mind, however, being responsible and checking operational ability and functionality routinely will save you from being upset and disappointed if a failure occurs when the time comes when the generator is truly needed. A Generac 5747 XG8000E is a good, middle of the road option for those seeking a home generator to have at the ready.