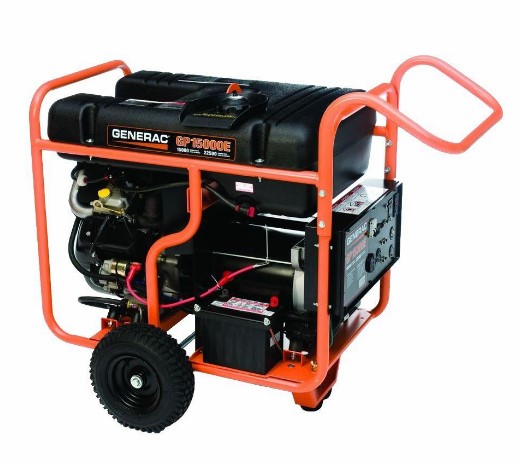 The Generac 5734 GP15000E puts a lot of power in a relatively small area with a lightweight wheeled steel tube frame for mobility anywhere. This tough generator is powered by gas fed into a industrial strength engine that powers with the touch of a button, not a pull-cord. Generac understands that you need a generator you can live with, so they’ve also added a muffler to the engine to temper unnecessary noise. A built-in circuit overload detector shuts down the power to the Generac 5734 GP15000E, preventing damage to the machine and to whatever devices to which it’s sending power. The Generac 5734 GP15000E gives you 15,000 watts of electricity whenever and wherever you need it. If you’re a hardware buff, car restorer, carpenter, plumber or event planner, the GP15000E can power you through your most demanding tasks.

On a full tank, this generator will run strong for a full 2 hours and with built-in wheels, can be transported just about anywhere you need power. If you live in an area that typically experiences adverse weather conditions such as winter storms or hurricanes that can cause you to lose power for days or even weeks, this generator is ready to keep your most important electrical appliances and tools powered up.

One of the primary benefits of the Generac 5734 GP15000E is its compact size that makes it easy to move it around any location on its pneumatic wheels. No frustrating cord pulling to start this machine, it has an electric one touch button that can be used by even the slightest individual. A single 15,000-watt engine can deliver power to one or more home appliances during a power outage and keeps you basement dry by running your sump pump. If you’re outdoors but need electricity, the GP15000E can run outdoor lighting, music and power tools. 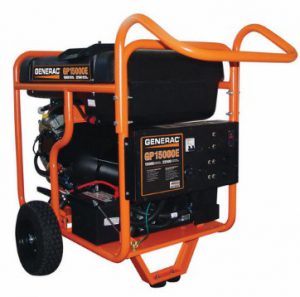 Previous purchasers of the Generac 5734 GP15000E have stated that if you do need repairs to this model, you’ll have to foot the cost of transportation for the person who comes to you to fix the machine. This cost is in spite of a warranty that covers parts and labor, but apparently doesn’t cover transportation. In addition to the cost of repair, it’s important to recognize the fuel cost for running this higher-power generator. Although the generator can be used to run several different electrical items, it does tend to also use a significant amount of gas, which in some areas, comes at a premium cost. Finally, replacement time for parts appears to be lengthy and can take months. To bypass this problem, it may be prudent to make yourself familiar with the working part numbers of this generator and find a local supplier, in case you need a quick fix.

“Bought this generator on line, Have used it to power the whole house and it did great. Fuel used matched what they said it would. At 9000 watts it was half loaded and did great. A 3/4 HP water pump started up in addition and it handled the load perfecty. It will use more fuel then smaller generators but that is to be expected as it has a lot bigger motor and generator.Good construction, Well built, heavy but built to last. Rating of watts is 15000, some manufactures would have rated it at 22500. 12 below zero and starts right up. Best safety net a person can buy.”

If you’re looking for a true workhorse that starts easily and can provide hours of electricity when you don’t have it handy, the Generac 5734 GP15000E is a durable machine that can work for you. If you want fuel efficiency, this machine isn’t made for saving on gas. Instead, it’s made to put the gas to good use, providing you with electricity you can use anywhere. Lighter units won’t be able to keep up with common demands made on generators like these and they generally break down fairly quickly from the strain. Not the GP15000E though. This machine is about as small as it could be, given the ability it has to replace power provided by commercial lines. Check out the Generac 5734 GP15000E, for a reliable source of energy that won’t let you down.