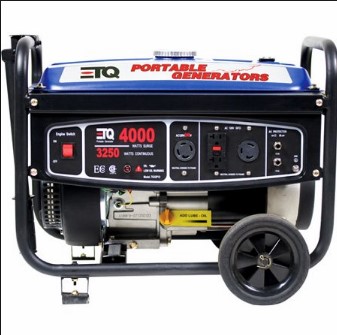 The ETQ TG32P12 gas powered portable generator is capable of giving a maximum output of 4000 watts. Such a high output capacity of the ETQ TG32P12 makes it one of the most powerful & heavy-duty gas generators currently available in the market. The power produced by the ETQ TG32P12 is more than sufficient for powering various home & office appliances. But even then, the TG32P12 has some negatives about it. Let us give you a detailed look at the performance & other features of the ETQ TG32P12 to give you a much clearer picture about the machine.

Power: The ETQ TG32P12 is most definitely one of the more powerful gas generators available in the market today. It is capable of producing a running power of 3250 watts & can go as high as 4000 watts. Its Sine power delivers clean electricity with low THD waveform.

Fuel tank: the fuel tank of the ETQ TG32P12 is also larger than most of the generators in its class. The fuel tank of this particular generator can hold about 4 gallons of fuel which is enough to run the machine continuously for 13 hours at 50% load. 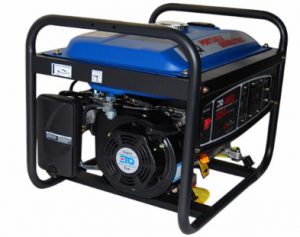 Motor: The ETQ TG32P12 is powered by a 7 HP 208cc 4-stroke air cooled heavy-duty OHV engine. It also has an indicator which would alert you when its 0.6L oil canister is almost empty.

Noise level: Noise level of the ETQ TG32P12 is quite low compared to other similar machines. The machine produces a noise of about 61 decibels at 21 feet. That means, you can easily carry on your conversations without having to raise your voice.

Appliances: All types of electrical appliances are supported by the ETQ TG32P12 both at home & in the office. In addition, it can also be used for powering garden appliances & workshop tools. Hi-tech digital electronics & computers can also be run with the help of this generator.

Price: The price of this generator ranges between $350 & $400 which is quite competitive, given the features it offer to the buyers.

Compliance: The generator is not CARB compliant. Therefore, if you are living in California; you won’t be able to buy this machine.

Warranty: The company provides a warranty of 1 full year from the date of purchase.

For most parts the ETQ TG32P12 is a good machine to have. It is powerful, efficient & reliable. It is not everyday that you would get a gas generator with a 4000 watts max capacity. Its oversized fuel tank can hold enough gas to make it run for a long time & at the same time you will not have to bear the loud noise of running such a generator. The price of the ETQ portable generator is such that it will be easy on your pocket.

But in spite of having such positive attributes, the ETQ TG32P12 is not a perfect machine. It has its share of negatives as well. Firstly, at 106 lbs the ETQ TG32P12 is certainly not a lightweight generator. So carrying this machine around will not be an easy task. Secondly, the machine is non-CARB compliant. So the residences of this state will not be able to use this. But since it has passed EPA testing, people residing in other US states will be able to use it. Thirdly, the machine only comes with only a year’s warranty which is quite low. So if something happens to the ETQ portable generator after a year of purchasing it, you will either have to fix the machine on your own or buy a new one. This limited warranty period, in a way, eliminates the price advantage it has.

But overall if you try to balance the pros & cons of this generator, it seems, the scale is substantially weighed in favor of pros. So, buying the ETQ TG32P12 Portable Generator would not be such a bad idea.