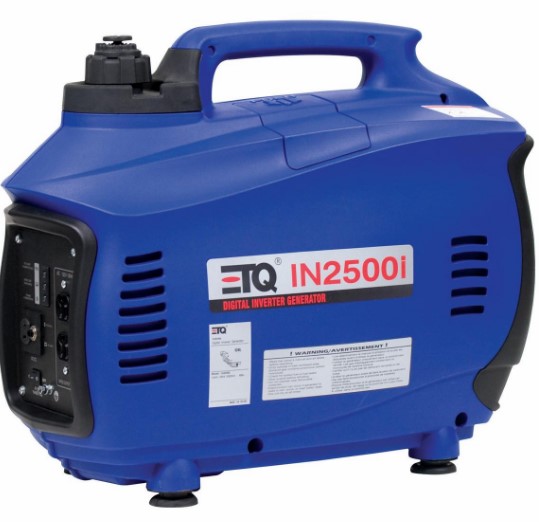 ETQ IN2500i portable generator is designed to carry on your power supply in the most efficient way. This machine is ideal for accidental power failure that will last for five hours or less. This very handy generator is crafted with superior technology to provide you with first-rate power and to endure longer.

ETQ IN2500i portable generator is manufactured by Eastern Tools & Equipment, the company that is known for its quality and cost efficient products. Powered by gas, this machine has a seal of quality compliance to almost all the states. ETQ IN2500i can power up basic household appliances no hassle at all. This lightweight machine is only 69 pounds makes it easier to carry where ever you need it.

This machine is best suited to unintentional power blackout, normally during electric line maintenance or some minor fortuitous events. With its 4.6 HP 125cc, gasoline powered heavy-duty OHC motorcycle engine it can produce 2200 watts of continuous power, with up to a maximum of 2500 watts of power. This enables runtime of 5.5 hours at 50% load and 4.1 hours at 100% load. The ETQ IN2500i is an excellent backup generator to keep your appliance’s functioning.

ETQ IN2500I weighs about 69 pounds and is made up of a solid plastic case. The light-weight feature and one-piece structure make the portable machine easy to carry and put somewhere else. Hence, this ETQ portable generator is the perfect choice for camping or in trailers.

ETQ IN2500i is safe to use for computers and other appliances use because of its computer controlled pure sine wave alternator. This technology is built to produce a clean sine wave with THD (total harmonic distortion) below 3%, making it safe for computers. ETQ IN2500I also has low oil shut off protection feature, to automatically detect low generator oil level. This machine will instantly stop working to protect it from possible damage.

ETQ IN2500i portable inverter generator earned 4.5 out of 5 ratings for Amazon.com. Customers who purchased the product are satisfied with the performance of this machine. With all its commendable features, this product is worth your money’s value. For your alternative power source, ETQIN2500i will not fail you.