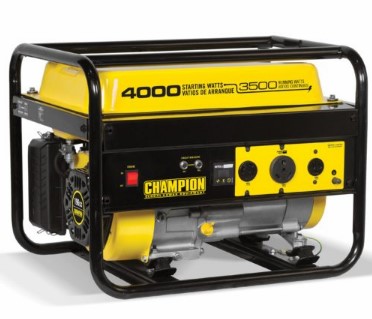 Whether you’re at a campsite, at home or at work, the Champion Power Equipment 46561 can provide dependable, portable power. The 3500/4000 watts generator can power a television, refrigerator, lighting and sump pump, all at the same time. The generator can easily be powered up by pushing the start button or activating the pull-starter. For those with little arm strength, the generator has a remote control feature. A simple push of a button, from as far as 80 feet away, powers up the generator. The remote control is small and it can be attached to a key chain.

The Champion Power Equipment 46561 does require some assembly, which takes approximately 30 minutes. After taking the generator out of the box, the handle and wheels must be installed, the battery must be hooked up and the oil and gas must be added. Additionally, you must insert the included batteries in the remote control. Once set-up, the generator is good to go. Monitoring of the generator can be done through a digital readout that tells you the output voltage, the cycles per second and the hours. Many people dislike generators because of the noise they make. If the lights go out, or when relaxing at a campsite, the last thing desired is to listen to the constant noise of a generator. However, compared to other generators, the Champion Power Equipment 46561 runs quietly; the noise is less than that of a lawnmower or snow blower. On a full thank, with a 50 percent load, the generator can provide power for up to 12 hours.

The following Amazon.com review by a new Champion Power Equipment 46561 owner paints a good picture of the generator:

“Just received my champion generator and so far I’m very happy with this purchase. I ordered it standard shipping on a Tuesday. and it arrived on the following Monday. The box was in great shape no dents or holes. The wheel kit had to be assembled and you have to put oil in it before you start it — no big deal. It is delivered with the battery and remote start. Once I put the oil in and added gas I tried the electric remote start and it started right up first try. I was surprised how quiet it ran without a lot of vibration quitter then some of the other generators I have seen. I only ran it for about a half hour or so but so far I would definitely recommend this generator.” 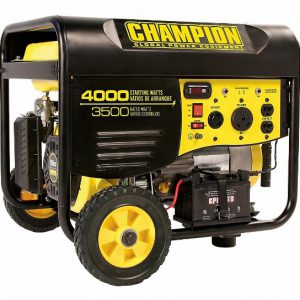 Even though this review is positive, there are several less positive reviews. Most of these reviews pertain to the customer service provided, not to the generator itself. The Champion Power Equipment 46561 comes with a 2-year limited warranty and users can enjoy a lifetime of free technical support. Even though the generator comes with 24-hours technical support, the customers that expressed unhappiness with the service mentioned long waiting times on the phone and unreturned voice mail messages. They contacted technical support because the item was received with broken parts or wasn’t functioning as expected.

Overall, the Champion Power Equipment 46561 is ideal as backup when the power goes off. There’s no need to be cold in winter, or hot in summer, when the power fails. The generator is powerful and even though it weighs 135 pounds, it has wheels, so it’s easy to move around. Additionally, the generator won’t take up a lot of space. Its dimensions are 28.5-inch (L) x 20.3-inch (W) x 20.5-inch. Whether you desire to watch television on a campsite, turn on the air-conditioning during a power outage, or want to operate several power tools, the generator can do the trick. The generator can’t be delivered outside of the United States. However, delivery within the United States is said to be quick. Aside from the minimal customer service complaints and the few generators that weren’t functioning correctly or received with broken parts, having the generator in your home, RV or office can be a lifesaver when the power goes off. It’s worth to take control of the power and look into getting the Champion Power Equipment 46561.