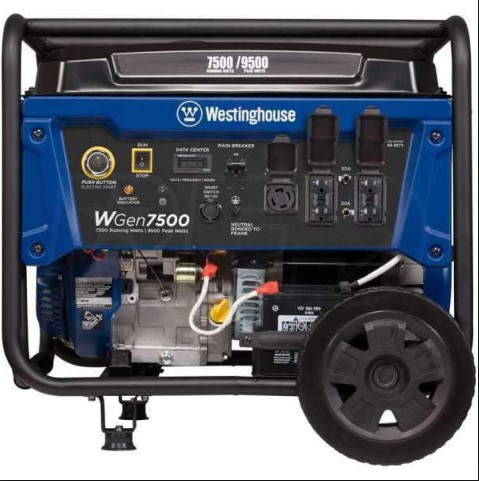 All Westinghouse products include a 3-year residential warranty and lifetime support.

We’re talking about economy here. Providing 2,000 running watts and 2,500 surge watts, this unit can run small and moderately big fridges, and that would be its limit. So, the power supplied is not that much. You can use it well for your RV if you don’t have a lot of high-demanding appliances, or for your garage door. The Westinghouse WGen2000 will also work perfectly for several light-duty tools at a workshop. But it would fail you if you tried to power heavy-duty machinery with it.

Not so heavy. It can be finely carried by two people, or a muscle guy.

If you need a powerful engine to light your house and keep your appliances running during a power outage, but you have a limited capital to invest in a portable generator that you can also take out at any time, the Westinghouse WGen2000 is a perfect unit for you.

Lodging a 212cc OHV motor protected by an iron sleeve, this is a powerful and resistant small generator that will provide reliable energy for many years to come. It is started by a pulling cord, which is usually considered as a con. But that’s not the case of the Westinghouse WGen2000 that starts quite quickly and more often at the first pull. The engine meets CARB/EPA/CSA strict emission requirements, and therefore can be used throughout the nation.

Considering that it lacks electric throttle technology, which you can find in the more advanced IGen series, its fuel efficiency is really impressive. It offers an almost 20-hour runtime on a full 4-gallon tank at half load. That’s a good runtime indeed.

Providing 3600 running watts, the Westinghouse WGen3600 is a great choice for home backup in case of emergency, or for taking profit of your RV’s equipment. It also has capacity for 4650 starting watts which is great for a capacitor starting and a ballast starting at the same time. But remember that if you run a fridge and an AC at the same time, it could happen that the circuit breaker activates.

It is quite similar to all the other WGen models. It is protected by a solid steel frame, which in this case is 1” thick. The Westinghouse WGen3600 also comes with solid rubber feet in front of the casters for the unit to stand upon, and the vibration is a bit minor than the WGen3600v.

As you could imagine, the WGen3600 is heavier than the WGen2000. I don’t really know if the official weight includes the caster kit and handle or not, cause the specifications on the brand’s site give 112 pounds for both versions. The addition or lack of caster kit and handle can’t change the weight in a noticeable way. Only three pounds at most. This won’t make it easier or harder to transport either.

The control panel on the WGen3600 has also some changes in comparison with the WGen2000. The former has just one duplex 5-20R 120-volt socket, that’s to say two conventional home 120-volt plugs. But it has two extra outputs since at 3,600 watts it puts out precisely 30 amperes at 120 volts. That means a L5-30R plug and a TT-30R plug for your RV. The outputs are protected by circuit breakers. Like the WGen2000, the WGen3600 has no gauges, time indicator or voltmeter. It comes with a motor switch to turn the circuits on and off. Also includes a low-oil shut-down system.

Delivering 5500 running watts and a max capacity of 6850 watts, we’re getting into the major leagues now. This is by far a better and more reliable choice for home backup, but it still has some power limitations and you will have to choose which home devices are your priority and leave aside some others. With such a power leap, the cost also takes a step beyond compared with the previous generators.

Logically, the gas consumption will also go up a bit. So, it will make you spend more on fuel, but that’s nothing you didn’t know and the unit also comes at a proportional price to the power it provides. If you want to take profit of your RV equipment without affecting the performance of your fridge and your lifestyle, the Westinghouse WGen5500 is highly recommended for you.

A major power output takes a bigger engine. The engine on the Westinghouse WGen5500 is a 420cc 4-stroke OHV engine. Nearly twice the capacity of the engine in the WGen2000 and WGen3600. It is also protected by a cast iron sleeve. It refrains its gas emission to a level that meets the same criteria as the previous generators, and then, it can be used in all 50 states. Fuel efficiency is present in this large machine and the consumption ratio is almost the same as the smaller versions. The gas tank is also larger with 6,6-gallon capacity that will provide around 13-hour runtime at half load.

While the Westinghouse WGen7500 has the same strong 420cc motor as the WGen5500, this generator delivers 7,500 running watts and 9,500 surge watts for starting. Such power is enough to light your entire home and power all of your appliances. If you purchase a Westinghouse WGen7500, you will also enjoy some extra features.

At last, we find an electric start. Consider that the starter system, battery, and bigger alternator increase the weight to 207 pounds. It comes with a drag handle and strong 10-inch casters like the WGen5500. The fuel tank as well has 6,6-gallon capacity. But the impressive power that this unit delivers shortens the runtime on a full tank to roughly 10 hours at half load.

Keep in mind that both WGen5500 and WGen7500 have the same engine. That means that running the same load on any of the two would consume more or less the same amount of gasoline. The difference is that half load of 7500 is more than half load of 5500. A bigger alternator also consume a bit more, but you won’t even notice that.

Ladies and gentlemen, may I have the honor to introduce to you the star of the night: The unparalleled Westinghouse WPro8500! Well, maybe I’m overacting but I needed to describe my awe and fascination for this heavy-duty generator. Now, we better get to the point and you will later decide if you really need such a big machine. Besides being capable of running a compressor, heavy-duty machinery and so on, what do we really need a jobsite generator to be? Wildly durable should be the first answer.

You have to be a macho to be at a jobsite, and that goes for your generator too. That’s why the frames and mounts must be hard. The machine will be probably taken on and off of a truck frequently. You occasionally get hit at a jobsite, and so will your generator. This is also a dirty and dusty place where any machine can get damaged without that we can even notice. So, what I need a jobsite generator to be, is being able to endure all this. I dare say, and I bet my life, that the Westinghouse WPro8500 has all what it takes to be a reliable jobsite generator that will make you proud.

First of all, the engine. This is fundamental for the performance of the unit and you need a qualified engine. The Westinghouse 457cc OHV 4-stroke engine is a magnificent beast. 13,5HP and cast-iron sleeve, this motor won’t just give you the power you always wanted, but it will do it for decades with scarce maintenance required. It meets EPA/CARB standards, so you can use it across the nation without breaking any law. Unluckily, Canada emission regulations don’t recognize it. It’s more likely a matter of bureaucracy. I suppose that it is a matter of time that you can use it in Canada.